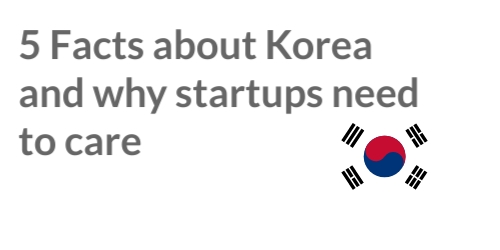 September 2019 | 1011 Words | (4 Minute Read)
If you haven’t considered Korea as a base to launch your startup, here are 5 reasons why you should. Funding and support from government, corporate, and global venture capitalists are just some of the reasons Seoul has one of the best startup ecosystems in Asia. In this article, we explore 5 facts about Korea and what they mean for startups in 2019.

There are 53M People in Korea and 26M live in the greater Seoul area. A bustling metropolis of tech obsessed highly educated citizens, each with a smartphone and credit card. Koreans are early adopters, quick to propel trends about new products through word-of-mouth and an active and influential community of netizens.
Sixty-five percent (65%) of the nation are college graduates and with many having an international education they are sophisticated and demanding Tech Consumers with reasonable Levels of English. Korea is growing in popularity across Asia and beyond not only as a producer and exporter of high tech products but also for its obsession with food, fashion, music and beauty. These are ideals and standards with massive global appeal.

Despite its relatively short history as an economic powerhouse Korea ranks in the top 15 global economies, with a GDP of more than US$1 TN. Speak to a Korean over the age of 40 for any length about the economy they will probably talk about 3 things; the Korean War, hard work, and being a shrimp between two whales. The Korean war came after centuries of isolation and oppression placing korea far behind the west’s definition of a developed country. The devastation of the Korean War left Korea as one of the poorest nations in the world but as you walk around the centre of Seoul, today, 65 years after an armistice ended fighting on the peninsula today’s Korea couldn’t be more different. Home to flagship designer boutique stores, and internationally renowned modern architecture it looks much like any other major city, but with a pleasing and uniquely korean flavour.  Its days as the shrimp between production behemoths China and Japan are definitely numbered, if not firmly resigned to history. It’s location serving as a hub for the asia region with more than 2 billion financially solvent and hungry consumers on its doorstep.

Due to its excellent infrastructure, reasonable cost of living and proximity to Japan and China South Korea is considered one of the most comfortable places to live in Asia.  It is no secret that Korea has the fastest average internet speed in the world. Akamai Technologies ‘State of the Internet’ report revealed that in 2017 Korea’s average speed of 28.6 Mbit/s was a massive four times the world average. But that’s not all, perhaps a more staggering achievement is that 99.5% of Korean households have internet access and according to data published by OECD, over 40 Million mobile Internet users, who from March 2019 will have access to 5G connectivity.  The rest of Korea’s infrastructure is not left behind with the total length of national highways in South Korea reaching approximately 14 million kilometers in 2017. The six major cities in Korea each have a subway system and there is an extensive and affordable rail and bus network connecting Korea’s main cities, ports, airports and tourist sites. South Korea is the third country in the world to commercialise a maglev train which provides a high speed connection to its award winning Airport. Incheon Airport has received the Airports Council International’s Airport Service Quality Award for the last 12 consecutive years.

Korea enjoys FTAs (Free trade Agreements) with 52 Countries and is home to an increasing number of desirable cosmetics brands and numerous global leaders such as those listed below.
Samsung, the world’s largest exporter of semiconductor chips and Apple’s leading supplier. Samsung also dominates as the largest smartphone manufacturer, based on recent figures, with 23.3% market share.
Posco, the world’s fourth largest steel exporter handles 7% of the worlds crude steel, over 40 Million Tonnes.
Hyundai, carries the title of the world’s 5th largest automaker based on annual sales (when you include its subsidiary, KIA).
LG, combined with Samsung make South Korea the top exporter of LCD screens with a 40% market share.
Korea can also lay claim to producing 6% of the world’s electrical goods, 29% of the world’s shipbuilding exports. And as home to one of the world’s busiest shipping ports has established itself as an important player in the global supply chain.

5. The Best Startup Ecosystem In Asia

It is not by chance that Korea has the best startup ecosystem in Asia. In 2015, the Korean government established plans to position South Korea as regional start-up hub by placing $3B USD on the table and more recently in 2017 pledged to establish a $9B USD venture fund made up of public and private finances. This bold commitment to the start up community has firmly positioned South Korea as having the highest government backing per capita for startups. There is a long list of government agencies tasked with supporting startups and a number of corporate funds providing several routes to funding,  free office space, legal and financial advice, and an acceleration program specifically aimed at foreign startups. This commitment has not gone unnoticed, Google, SparkLabs and other big names have also set up operations in Seoul over the last three years.

These are just some of the reasons that make Korea an excellent choice to launch a startup. Korea is attracting more and more foreign students, many fall in love with Korea (or in Korea) and want to stay generating a growing pool of qualified international talent. Of course, there are some hurdles to overcome but the benefits are greater than the barriers. And the commitment from government, local and International business shows a promising future. And as is often the case, those that get in early have most to gain.