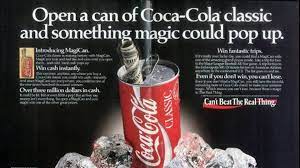 Nothing can be great and terrible at the same time, right? Well, it appears it can and was in the ’90s. – Coca-Cola MagiCans!

I stumbled across this over the weekend. On one hand, this is great, genius, creativity, but it was a disaster! Hence the opening paragraph!

But first, watch the Coca-Cola MagiCans advert from the ’90s

Pretty cool right, so Coke devised a way to put a prize (cash) inside a coke can that popped up when the can was opened.

The campaign ran in the United States of America I’m May 1990 and was called “Magic Summer ’90” promotion.

Around 750,000 cans had cash prizes or gift certificates inside instead of Coca-Cola. The prizes were cash amounts of $1 to $500, coupons for trips or merchandise. The special cans contained a spring-loaded mechanism to push the prize out of the opening when the can was opened. The prize would either be money, from $1 to $500, or coupons redeemable for trips or merchandise.

A number of cans had technical problems and the pop-up mechanism failed or jammed. Or even worse, some cans had a faulty seal and the chlorinated water mixture leaked into the can itself and messing up the prizes.

And yes – you guessed it, someone drank the chlorinated water. An 11-year-old boy in Massachusetts.

Worried about bad publicity and potential lawsuits, Coke ran a television and newspaper campaign warning that a “very small number” of cans contain a foul-smelling but harmless water that should not be ingested. The ads were headlined “Take A Good Look” and in smaller type, read “You could have a MagiCan.” But due to complaints and consumer mistrust the campaign ended in just 3 weeks.