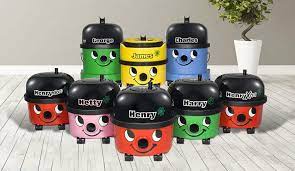 Recently, my wife and I volunteered to clean the church, twice a month. Like a lot of places in the UK, the hoovering weapon of choice is Henry Hoover and seeing the iconic eyes, red body and black ‘bowler hat’ got me thinking… what’s Henry Hoover’s story?

The story behind Henry Hoover’s personification is actually quite fun, and I will share that in a minute. But what I also discovered was that Numatic, the company responsible, spends nothing on advertising, word of mouth and appealing brand recognition has elevated the product to a place where this is not necessary. Henry is a hoover, hoovers suck and let’s face it are not that interesting. But Henry has ‘vax’ appeal.

Of course, like most I referred to Henry as a hoover, technically this is wrong, Hoover is a brand, and a brand unrelated to Henry. So I suppose really it should be Victor the Vacuum, or Norman the Numatic, but the alliteration of Henry and Hoover is just so much better.

I have to admit that Henry is rather cute 😍.

Did you know, Henry has a whole family. The range boasts 17 models, and 6 playful characters; Henry, Hetty, Harry, George, James, and Charles… etc. But it is Henry that is most recognisable… so how did it all begin?

The story goes like this; In 1970, Numatic founder Chris Duncan was on a British stand at a Lisbon trade show. One evening, he and one of his salesmen found some chalk and drew a smile under the hose outlet, which looked like a nose, they added some eyes and named him ‘Henry’. They put it in the corner of the stand and the next day people were laughing and pointing. Nurses asked to buy one for the children’s ward, to encourage recovering children to help with the cleaning, after adding properly designed eyes and mouth to the production model office cleaners were soon talking to Henry as a way to break up the grind of night shifts.

Numatic has a turnover of almost £160m and has made more than 14m Henry Hoovers, (and claims most are still in use) including a record 32,000 in one week. But it never advertises Henry and has no PR agency.

The Henry Hoover story is just one example of giving a product a personality, making something instantly recognisable, making something fun – in an otherwise dull industry -and turning your customers into advocates, is an almost guaranteed way of putting you on the road to success.

Henry Hoovers seem to be robust, long-lasting, and are reasonably priced but without the eyes it is hard to believe that its success would be anywhere near what it is today.